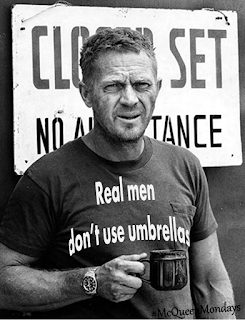 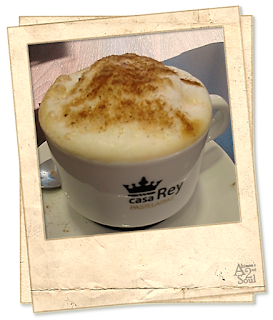 Last Saturday I decided I needed a much deserved break before going to the supermarket. It takes a special kind of courage to do the weekly groceries shopping in the local, overcrowded supermarket. So I made a stop at “Casa Rey”,  the neighbourhood coffee shop where I’m know for my sweet tooth.

This time around, I decided to go “Sally” about it, as in the Meg Ryan’s character in “When Harry Met Sally”, thus describing in detail my order: “I would like a ‘meia de leite’, please, but could you prepare it as follows? I just want a third of coffee,  two thirds of milk and lots and lots of milk foam, please. And lukewarm, too, please”. The waitress smiled, said a laconic OK and began to prepare my order.

As she brought the “meia de leite” to my table, I wowed: it was beautiful! She took it quite literally the whole “lots and lots of foam”. I smiled  and thanked profusely. As she was about to put the cup on the table she asked “Would you like some cinnamon or chocolate on top?”, “Why yes, I’d love some cinnamon, please”, I replied giddily. Not only the “meia de leite” looked beautiful, but it was delicious too: a third of coffee, two thirds of milk, lots of foam, and truly lukewarm.

As I paid I told her it was the first time, ever, someone got the order right. She replied modestly, it wasn’t that peculiar a request. So there you go: want to be treated like a Princess? Go to the King’s House (Casa Rey)!

The American Classic of the 09:18 train

“Thou shalt not covet thy neighbor’s… book.”. If such commandment existed I would be the most sinful of all sinners! It doesn’t matter how good the book/magazine article/bottle label I’m reading is, I will always be interested in what people around me are reading. If in the corner of my eye I see a a book cover…  I will, most likely, take a break of whatever I’m reading, and start coveting my neighbor’s book. I’m not proud of it, of course, but it is what it is.

Not only will I (quite absentmindedly) envy in silence what other people are reading, but I will also make quick mental notes about it. Oh yes, “though this be madness, yet there is method in ’t” as Polonius said to Hamlet. I’ll find myself laying about mental notes “hmm… interesting!”, “aaaah, that’s on my to read list, yes”, “really?! You’re wasting precious brain cells on THAT?”, “I wonder if the translation is any good?”, “Oh I loved that! Isn’t it wonderful?”, “You are in for some great hours of entertainment!”, “there’s a sequel?!”, “mom and dad have that one, I should borrow it from them…”, and so forth. But rarely do I take notice of the reader, the object of my attention (and coveting…) is solely the book.

Of course, commuting, only heightens my coveting skills: there’s so much supply! I think it was last year, as I was getting out of the train and walking towards the tube I saw “…wain… berry… ventures”. I had an immediate laughing mental note “Mark Twain’s Adventures of Huckleberry Finn! Who doesn’t like an old fashioned boyish adventure? Well Huckleberry Finn is a bit more serious, but still… I really need to borrow it from Mom and Dad…”. When I was in the tube platform waiting for the train, I bothered to take a look at the reader of such adventures. First I noticed the well cared for hand, with the shiny band of gold in the ring finger, that was holding “…wain… berry… ventures”. Then the light blue shirt, the impeccable navy blue suit jacket and trousers, the dark shiny shone shoes, the trimmed, well combed hair, the marble smooth shaved face, the chiseled profile, the striking dark brown eyes. Everything about him was sharp and elegant. Though he wasn’t very tall, he stood out in the platform of tired, sleepy, grumpy commuters like myself. Even the way he walked on the platform was striking, he wasn’t walking really, he was strolling purposefully,  with poise, balancing his suitcase on one hand and the book in the other. I’ll admit I was mesmerized: he was a walking, living, breathing handsome advert for Hugo Boss, with a Mediterranean flair. I sighed, I was coveting, all right, but not the book anymore…

Some time ago, I was running late and rushed into the 09:18 train to Lisboa, sitting in whatever seat was available. And there it was “…iamond…ig…Ritz”, another American classic, but by F. Scott Fitzgerald. I have always wondered what a diamond as big as the Ritz was, and made a mental note to read the book. And then, to my surprise, who else but the elegant commuter, was sitting across from me, reading “The Diamond as Big as the Ritz and other stories”. Again, he looked impeccable, his coat neatly folded resting on his knees, the suitcase by his side. However,  my American Classic was sleepy, so he carefully kept his book in the suitcase, lowered his chin and took a nap. I tried very hard to concentrate on my own book, but it was quite difficult: the American Classic, even sleeping and slouching, with one of the shirt buttons undone was quite handsome.

Since then, I’ve been curious: what is a diamond as big as the Ritz, really? And does he only read American classics? Is he like the tall, slim, pale, curly hair “thronie”* on black skinny jeans, that is devoted to the one genre? I feel tempted to recommend Steinbeck to him, but I’m still mustering up the courage to do it. Until then, the American Classic of 09:18 train, is the highlight of my tardiness.

Note: “thronie” was the suggested name, from a friend on Facebook, for a fan of The Game of Thrones.
Sem comentários:
Enviar a mensagem por emailDê a sua opinião!Partilhar no TwitterPartilhar no FacebookPartilhar no Pinterest
Soul Label: books, commuting, lisboa
Mensagens antigas Página inicial
Subscrever: Mensagens (Atom)

Ahimsa
Lisbon Suburbia, Portugal
I love reading, travelling, cooking, riding my bike on sunny days and getting lost in Lisbon.